The names of God: El Elyon 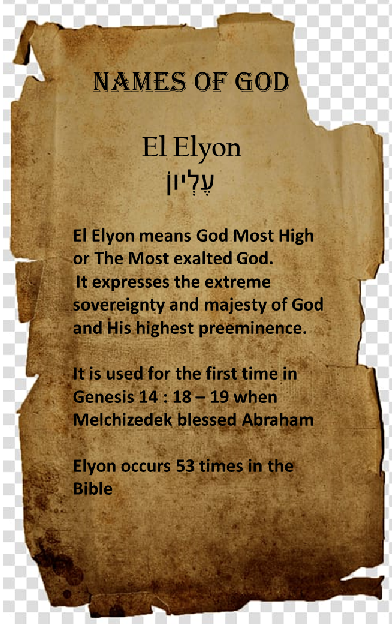 And Melchizedek king of Salem brought out bread and wine. (He was priest of God Most High.) And he blessed him and said, “Blessed be Abram by God Most High, Possessor of heaven and earth; and blessed be God Most High, who has delivered your enemies into your hand!” And Abram gave him a tenth of everything. Genesis 14:18-20 ESV

When we talk about El Elyon – God Most High – we’re talking about the highest authority in the heavens and the earth. There is none higher. An extreme adjective to use in place of Most High is supreme. We have the court that his the highest court in the country. If legal appeals are made they can go to higher courts until they reach the supreme court where the final decision is made. Their decision is final. God the Most High is supreme over everything in the heavens and on earth. What he says is absolute. It is beyond contestation.

This is both daunting as well as a relief, as he is both the judge and the one who justifies according to his righteousness and mercy.

It is daunting if we are under his judgment as who can then appeal against it?

However, it is a relief if we have received his mercy, his acquittal, his justification, which he offered freely in Jesus Christ. For if God is for us then who can be against us? The Most High himself has become our Father who cares for us. Through the death of Jesus on the cross we have access to Him who holds the highest authority in the universe. He has judged Jesus on our behalf giving us favour with himself and that is without contestation.

If we stood on trial before the supreme court as the judge announced his judgment stating that he finds you not guilty. You have been acquitted of all accusations and declared free from all future judgment. You have been justified by the supreme court. How would you feel? This has happened when El Elyon – The God Most High – acquits us from his judgment and, not only declares us not guilty,  but declares us righteous, on the basis of what he’s done for us in Jesus on the cross. The joy, the ecstasy, and delight to be found right in the eyes of him who is supreme over all!

This will surely put our hearts at rest before him and all that we face in life – if we believe it!